November 17, 2009 (DVD & Blu-ray)
December 16, 2010 (First TV Broadcast)
"A Very Sunny Christmas" is the thirteenth and last episode of the sixth season of It's Always Sunny in Philadelphia. It originally aired on FX in December 2010 (after Season 6 completed airing) but was first released on DVD & Blu-ray in November 2009. It is 43 minutes in length, twice the length of a typical episode.

Christmas is nearly here and the Paddy's gang has got the spirit. For the gang the holidays have always been a time of trickery, backstabbing, and disappointment. But this year they are determined to rediscover the joy of Christmas. Mac, Charlie, Dennis, Dee, and Frank embark on a holiday adventure filled with stolen toys, childhood videos, naked elves, and a bloody run-in with Santa Claus that is guaranteed to blast Christmas spirit all over!

While decorating Paddy's, Charlie and Mac mock Dennis and Dee for hating Christmas because Frank was a terrible gift giver. Dennis corrects them, clarifying that Frank would buy whatever they wanted most for himself and would rub it in their faces. This year, Frank has bought Dennis' dream car, a Lamborghini Countach, and a high-end designer handbag that Dee wanted.

Dee and Dennis decide to track down the old business partner Frank screwed out of millions of dollars to teach Frank a lesson. Eugene has recently converted to Christianity and only agrees to pretend to be a ghost if he can tell Frank about Jesus. At Frank's apartment, Frank tries to kill Eugene because he is pretending to be a ghost. Dennis and Dee bust in and make him watch an old home movie of them opening empty boxes on Christmas morning and him laughing at them.

Dennis and Dee take Frank and Eugene to their old real estate office and sew Frank into a couch so he can overhear his former co-workers gossiping about him. He gets too hot in the couch so he strips naked, then slips out of the couch, walking nude across the entire party with everyone staring at him.

At a cemetery, Dennis and Dee show their father an empty grave with a tombstone that reads "He was a dick of a father." He figures out that they're not teaching him lessons to change him, but so that he will buy them good presents. He leaves in his Lamborghini.

Mac and Charlie head to Mac's house to find some of his favorite toys from Christmases past. They find an Omnibot and a videotape of Mac's 1985 Christmas. It turns out that Mac's family would break into houses to steal their presents. Mac swears it was a neighborhood tradition, but Charlie informs him that he was just robbing innocent families.

The two head over to Charlie's mother's house where Charlie tells Mac about how when he was a kid, Santas would come over on Christmas morning and give him presents before going up to "cheer up" his mother Bonnie. Mac informed Charlie that his mother was prostituting herself out for money and presents. This is a hard pill for Charlie to swallow.

Mac and Charlie apologize to Ricky Falcone, the boy that Mac unknowingly stole the Omnibot from. They decide to go to the mall to get him the hottest toy for his kids. At the mall, Mac nearly fights a toy store clerk for not giving him a robot toy from the "special reserve". Charlie drags him away, but sees the mall's Santa and approaches him, demanding to know if he banged his mom. He ends up biting and punching the Santa, and Mac has to literally drag him away.

At Paddy's, Mac, Charlie, Dennis, and Dee whine about how crappy Christmas is. Charlie receives a call from the hospital that Frank has died. They go to verify his body but he is still alive. He did crash his car and had a vision of a claymation land where an elf sang about how the four other members of the gang murdered Frank for being horrible. Frank promises them that he will make it up for them, but Dennis interprets it as a message that the four should stick together if they want to have a good Christmas.

They all go over to sing Christmas carols to Ricky Falcone at 4 AM where they are booed and glass bottles are thrown at them. Dennis' car is towed and they must walk two hours back to Paddy's. Inside, Frank has decked the entire bar with decorations and bought them all presents, including the Lamborghini and the designer hand bag. Eugene then shows Frank his gift - a handgun. He doesn't give Frank the gun, but instead steals all the presents and blasts them with a snowblower.

Upset that all their gifts were stolen, the gang spends Christmas morning throwing rocks at trains, a tradition Mac and Charlie have held onto since they were little boys. 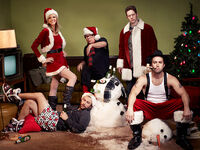