September 13, 2005
"Charlie Got Molested" is the seventh episode of the first season of It's Always Sunny in Philadelphia.

When news of a former gym teacher getting arrested for molesting his students hits Charlie suddenly gets nervous, causing Dee and Dennis to conclude that he may have been a victim and stage an intervention. Mac becomes jealous that he wasn't the one who got molested.

As the gang plays pool, Mac reads in the newspaper that his and Charlie's former gym teacher Coach Murray is being charged with molesting two students back in the '80s. Charlie immediately becomes concerned and leaves the bar. Dennis postulates that he was also a victim.

At Dennis and Mac's apartment, Dennis and Dee talk about their Psychology education, and that they should hold an intervention for Charlie. Mac, on the other hand, becomes more and more aggravated that the McPoyle brothers and Charlie were molested but he wasn't.

Dennis and Dee follow Charlie to the McPoyles' apartment. In their minds, this confirmed their thoughts that he was molested. Inside, Charlie tries to convince the brothers to drop their lawsuit against the school board; the brothers are revealed to be incestuous and to have gotten the idea to fake having been molested as children in order to make a fortune off of a lawsuit against the school board, having gotten the idea from Charlie a year prior when he drunkenly suggested it at a New Year's Eve party. The brothers then threaten to tell the police that it was all Charlie's idea if he rats them out.

Meanwhile, Mac goes to Coach Murray's apartment wearing short shorts and tries to get Coach to make a pass at him. He gets wise to Mac's plan and kicks him out. Back at the bar, Dee and Dennis try to talk to Charlie but end up fighting with each other and Charlie leaves. Mac arrives, stating that after researching child molesters, he doesn't think Charlie was molested. Dennis and Dee laugh that off and go to Bonnie Kelly's apartment.

There, they tell her what they think happened to Charlie. She calls Charlie and he arrives to find his whole family including Uncle Jack, his grandmother, Dee, Dennis, Ryan and Liam McPoyle. His mother begins the intervention, and tries to get Charlie to point on a doll where he was molested. He reluctantly points to the butt.

In the car with the McPoyles, Charlie decides to go to the police station with them to file a lawsuit against Coach. There, he rats out the brothers and leaves. At the bar, Dennis and Dee celebrate helping him, although he tells them they actually ruined his life. Mac returns to Coach's house to apologize, and after he leaves Coach mutters "he's going to hell."

Mac: I knew these two brothers that the article was talking about. The McPoyle twins. Ryan and Liam. They were the type of kids that would blow snot bubbles and run 'em all over each other. They were gross. And they smelled like a couple of unwiped assholes.

Mac: If the McPoyles got blown, and Charlie got blown. Why didn't I get blown?!
Dennis: You're going to hell, dude.

Charlie: Where's your brother?
Liam McPoyle: We just stepped out of the shower. He'll be down in a minute.

Charlie: OK, OK. First of all, there are people out there who actually have been molested and you guys are going to exploit that for your own personal gain? You assholes are securing your places in hell.
Ryan McPoyle: We've thought about it. We're willing to roll the dice.

Bonnie Kelly: Be strong Bonnie. Be strong for your little gingerbread man. Now is not the time for an episode. 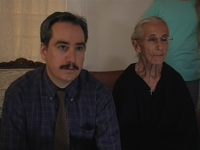 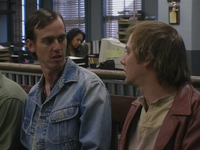 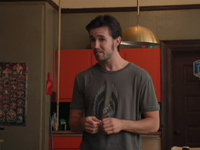 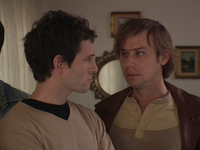 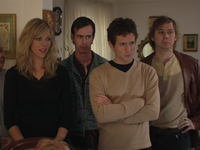 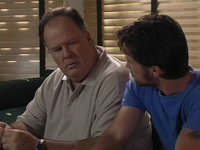 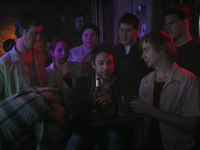 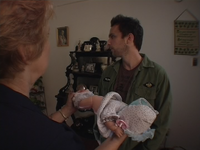 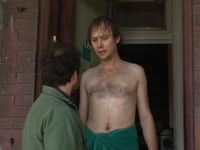 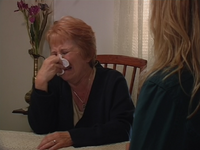 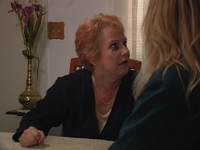 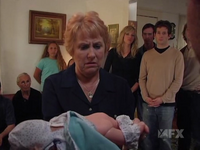