Dee Made a Smut Film

"Dee Made a Smut Film"

January 27, 2016
"Dee Made a Smut Film" is the fourth episode of the eleventh season of It's Always Sunny in Philadelphia.

Dee lands a bit role in a pornographic film, and Dennis' uses her to direct a film adaptation of his memoir. Meanwhile Frank, Charlie, and Mac explore the art world, and are eager to prove that art is meaningless.

Dee gathers the Gang together in her apartment as she orders a movie that she has recently starred in, much to the disbelief and skepticism of the guys. They are amazed as the scene opens and they realize Dee actually is in the film, starring alongside actor Richard Grieco. Their amazement quickly turns to confusion, and it is revealed that the movie is actually a smut film as Grieco receives oral sex from a woman. They ask her where she ordered the movie from, and when she replies "Cinemax", the guys burst out in laughter, while Dee is quick with denial and claims that it's merely a foreign art house film.

Mac sets in motion his plan by bring Charlie (who is emulating Richard Grieco and using out-of-date slang) and Frank to an art gallery. He frames one of Charlie's doodles in a frame and places it on the wall before speaking loudly around a group of people about what an interesting piece it is, only for it be taken down and thrown in the garbage by what turns out to be the gallery's owner. As Mac digs it out of the trash and demands an explanation for why Charlie's doodles are not art, yet the same poorly-composed painting next to it is, she explains to him that art is all about context, and the context of the painting is that its artist grew up during the Holocaust. During this explanation, Frank finds himself captivated by the painting and enters a deep trance as we're shown a brief montage of World War Two imagery. Mac now sets out to prove the gallery owner wrong.

At the same time, Dennis finds himself at the Philadelphia Film Society, and walks into a woman's office while reading an explicit passage from his memoir. She immediately picks up that his intent lies in filming an adaptation of his memoir and is disinterested, as he explains it would be just like 50 Shades of Gray. She comments that that novel was written by a woman, and in order to gain her favor, Dennis claims that his memoir was also written by a woman, and would be directed by a woman, who turns out to be Dee.

Mac's revised plan includes staging a gallery event at Paddy's under the guise of the artist being Rickety Cricket, but it actually being Charlie's art. He has Cricket dictate scenes from his life to Charlie for him to draw, including a "dog three-way", and then sets Frank on a recon mission to get the gallery owner to come to the bar's art exhibit. Frank claims he can do it as he used to hang out with artists in the seventies when Mac explicitly warns him not to go overboard with it. The next scene cuts to Frank at the gallery, dressed exactly like Andy Warhol and talking with a slightly higher, emphatic voice. He acts like a stereotypical artist as he randomly declares various pieces to be garbage, while praising an air conditioner as brilliant. Frank again finds himself captivated by the Holocaust painting, and when he returns to tell the news to Mac, he has bought both the air conditioner and the painting.

Meanwhile, Dennis walks into Dee's apartment and catches her in the middle of figuring out an editing software. He pitches the idea to her about directing his movie, obviously irritated that he must enlist her help, while she happily declares she's always wanted to direct. The first scene takes place in Dee's apartment, set up to look like a librarian's office, with Richard Grieco playing Dennis. Shooting is a messy disaster, and Dee asks Dennis what event this scene is based on. He reveals that he had sex with his high school's hot, young librarian. Dee remembers that she was nearly 50 and "looked like Rick Moranis", but is more concerned with the fact that Dennis was 14, and was technically raped. He denies this by saying that it was mutual and that men cannot be raped, while Dennis becomes frustrated with Grieco and takes his place in the movie instead.

Back at the bar, the exhibit is underway with Cricket poising as the artist when Frank arrives in his Warhol costume, having bought both the painting and the air conditioner. Soon after the gallery owner arrives and Mac overbearingly tries to get her to admit Charlie's drawings are art. At the same time, Dee wheels out a TV and announces she has finished editing Dennis' movie, much to Dennis' opposition. What is shown is none of the actual footage, and is merely crudely cut together images of a younger Dennis that eventually pokes fun at the fact he was raped. After asking her if it's art, the gallery owner skirts around declaring it so, and that art is only worth what people perceive it to be, which is why Frank bought the cheap painting for 30+ thousand dollars. Dennis then launches into a a speech about how art is subjectively determined by specific people, before tacking on at the end that he wasn't raped. They all remember Ms. Klinsky, when Cricket deadpans "Even I wouldn't do her." The screen cuts to black.

Dennis: But if one thing has become abundantly clear to me today, and it should be to all of you as well. It's that I wasn't raped. Had a good time she and I. Yeah. It was a... it was a two-way road. The whole thing was... mutual. And the woman in no way looked like Rick Moranis.
Charlie: She totally did. I remember her. Remember her?
Mac: Yeah.
Rickety Cricket: Real dog. I wouldn't even sleep with her. 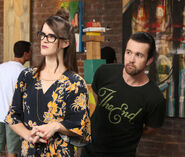