As the Gang makes fun of Frank as he makes a hoagie inside of his mouth, an old man arrives. Frank and the man begin fighting. After Frank smashes a beer bottle on his head, he introduces him as his older brother Gino.

The two bicker with each other about stealing the love of each other's lives from each other. The rest of the gang pulls up seats to hear about the story which takes place in the 1960s. When Frank was 19, Gino got him a job at a jazz club and he fell in love with a girl named Shadynasty (pronounced sha-DYE-nuh-stee).

The Reynolds brothers eventually opened up their own club. Shadynasty's former lover Reggie came to politely yell at Frank and Gino beat him up. Gino and Reggie were sent to prison, and once they got out Gino was addicted to cocaine which Frank didn't approve of. Reggie later came to the club as a Black Panther to politely give a pamphlet to Gino, but Frank was worried he was reaching for a gun so he shoots Reggie in the arm.

Frank flees to South America where he worked in quality control at a cocaine farm. He missed Shadynasty too much after two years so he returned to find her in the arms of Gino. She is also addicted to cocaine and he makes her choose between him and drugs and she chose drugs.

Gino says that she left him soon after. He says that he found love letters that he believed to be Frank's. The gang then reads in a letter that she will be at the airport. The gang then goes to the airport to find Shadynasty with Reggie. Reggie is detained by airport security, as he is apparently on the no-fly list, and Frank and Gino leave, saying that Shadynasty didn't really age well anyway. 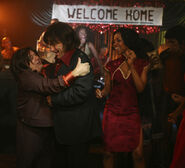 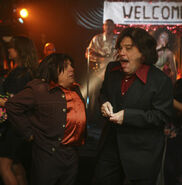 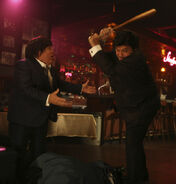 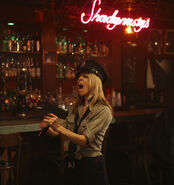