"Frank Sets Sweet Dee on Fire" is the eighth episode of the third season of It's Always Sunny in Philadelphia.

Dennis, Dee and Frank argue about the importance of newspapers. Mac barges in and turns on the TV for a news segment he quickly appears in. He gets upset his clip was cut so short so he and Charlie decide to make their own news show. Frank wants in and Dee warns him that people get hurt when he join in their hi jinx.

At Paddy’s Charlie tapes a flashlight to the camcorder and he and Mac decide to air their show on Public Access TV. Frank makes fun of public access so they turn it on to see a dancing guy. They try to turn it off but are temporarily mesmerized.

Dennis and Dee comment that it takes no skill to become famous anymore. Dee decides to attempt to become famous by appearing at clubs and Dennis comments she should accidentally leak some upskirts and nip slips, as he plans on becoming famous just for knowing her.

At a retirement home, Mac interviews an old woman who turns out to be racist. Frank suggests burning the retirement home down for excitement but Charlie suggests they go to Chinatown, where they bicker over what to film. Mac assumes a crowd is cheering on a martial arts display but it turns out to be Wii tennis. A spectator chokes on his gum and Mac punches him in the stomach, dislodging the gum. Mac and Frank are excited until Charlie tells them the camcorder has no tape. They decide to re-enact the heroic event.

Outside a popular night club Dee complains that the line is too long. She is already drunk so she passes out in a pile of garbage. The women in line next to Dennis offer him ecstasy and he dances at the club all night. The next night they go to the same club where Dennis suggests Dee talk down to the bouncer until he lets them in. Dee strongly insults the bouncer so he lets Dennis in and not her. He drops more E and dances with dancing guy from the public access TV show.

Outside the building next to Paddy’s Charlie pumps Mac up to run inside and rescue a box of kittens. Mac deduces they plan on setting the building on fire and refuses to do it. Dee walks up and they enlist her. When she’s inside Frank tosses in a match and she runs out on fire, and throws the box of kittens. Charlie, Mac and Frank refuse to use the footage because she threw the kittens so they decide to re-shoot it. They then watch dancing guy on public access TV again.

The next day they get Dee to rescue the same box of kittens at the bottom of the well. Frank lights it on fire again and Dee throws the box of kittens again. Dennis tells them she needs to be famous before anyone cares about her heroics so he takes her to the clubs where they drop E.

The next day at Paddy’s Mac, Charlie, and Frank are working on a “cat chopping contraption” for their news show when Dennis and Dee arrive hung over. They declare their interest in becoming famous over just as dancing guy comes on TV. They watch it and they all see Dennis and Dee dressed up as babies dancing with the dancing guy.

Charlie: Remember when we made the news show for eighth grade for social studies, dude?
Mac: See, that was real news.
Charlie: Yeah, we didn't distort facts. We told it like it was, you know?
Mac: Yes.
Dennis: Yeah, I remember that video. You guys were burning G.I. Joes and throwing rocks at cats.

(Mac is interviewing an old woman at the retirement home)
Mac: Hello, miss, what's your name?
Irvene: Irvene Simon.
Mac: Hello, Irvene. Why don't you tell us what's really going on here?
Charlie: (off camera) Cool face, hold it.
Irvene: Well, I get up around 5. 5:30 if it's bingo the night before. Then I eat breakfast. I like to have fruit.
Old Man: She steals the grapes!
Irvene: I do not!
Old Man: Check her purse!
Mac: OK, I think we've covered breakfast, let's move past it.
Irvene: Then after breakfast, I like to sit and read recipes. I don't even know how to cook! (Starts to laugh.)
Mac: Is there anything you'd like to tell the world, Irveen?
Irvene: My grandson's birthday is on Friday.
Mac: No, no. Is there anything about this place that you don't like?
Irvene: The blacks. 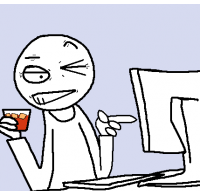