It's Always Sunny in Philadelphia Wiki
Register
Don't have an account?
Sign In
Advertisement
in: Season 13 Episodes, Episodes on a Saturday, Episodes at 10:15 am,
and 2 more

November 7, 2018
"Mac Finds His Pride" is the tenth and final episode of the thirteenth season of It's Always Sunny in Philadelphia.

Frank tries to recruit Mac for the gang's kickass float for the Gay Pride Parade; Frank comes to the realization that Mac will never be secure with his sexual identity unless he comes out to his father. 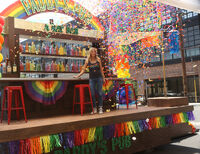