The first season of It's Always Sunny in Philadelphia aired on FX through the end of summer into the early fall of 2005. It is composed of seven episodes and is available to purchase on DVD and digital formats.

The Gang converts Paddy's Pub to a series of specialty bars: first a gay bar, ("The Gang Gets Racist") then one that serves underage drinkers. ("Underage Drinking: A National Concern") Then the bar gets robbed, and the Gang decides to buy a gun to protect themselves. ("Gun Fever")

Charlie engages in a series of schemes to impress the Waitress: first to prove he's not racist, then to show her that he volunteers with Big Brothers Big Sisters; ("Charlie Wants an Abortion") when those fail, he tricks the Gang into telling her he has cancer. ("Charlie Has Cancer")

The Gang also engages in infighting: Mac and Dennis fight to date a girl whose grandfather died in the bar, ("The Gang Finds a Dead Guy") and then Mac feels competitive with Charlie about getting molested. ("Charlie Got Molested") 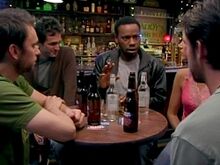 "The Gang Gets Racist" August 4, 2005
Directed by: John Fortenberry - Written by: Charlie Day & Rob McElhenney
Charlie and Mac try to prove that they are not racist after Charlie's crush overhears Charlie saying something offensive about African Americans. Meanwhile, Dee hires a black man from her acting class to boost business for Paddy's Pub -- and ends up turning the pub into a gay bar.
|

"Charlie Wants an Abortion" August 11, 2005
Directed by: John Fortenberry - Written by: Charlie Day & Rob McElhenney
Charlie gets a paternity test to prove that he's not the father of his old flame's ill-behaved son. Meanwhile, Mac and Dennis feign being against abortion so they can pick up women.
| 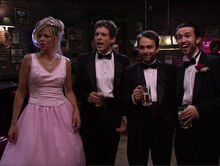 "Underage Drinking: A National Concern" August 16, 2005
Directed by: Dan Attias - Written by: Rob McElhenney
When Mac decides to make Paddy's Pub a safe haven for underage drinkers, it becomes high school all over again as Dee, Dennis, and Charlie get asked to the prom.
| 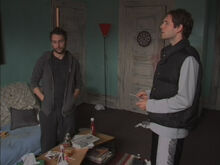 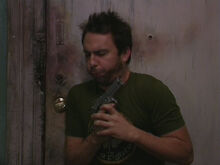 "Gun Fever" August 30, 2005
Directed by: Dan Attias - Written by: Glenn Howerton
Everyone gets trigger happy when, in the wake of a robbery, the guys buy a gun, and Dee unknowingly dates the prime suspect.
| 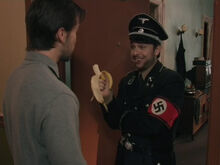 "The Gang Finds a Dead Guy" September 6, 2005
Directed by: Dan Attias - Written by: Rob McElhenney
When an old man is found dead in Paddy's, Mac and Dennis vie for the affection of his attractive granddaughter, while Charlie discovers that Dennis and Dee's grandfather was a Nazi.
| 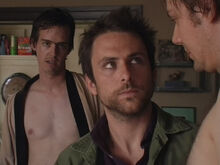 "Charlie Got Molested" September 13, 2005
Directed by: John Fortenberry - Written by: Rob McElhenney
When news of a former gym teacher getting arrested for molesting his students hits, Charlie suddenly gets nervous, Dee and Dennis conclude that Charlie may have been one of the gym teacher's victims. Mac becomes jealous that he wasn't the one who got molested.