It's Always Sunny in Philadelphia Wiki
Register
Don't have an account?
Sign In
Advertisement
in: Seasons, Season 10

On March 28, 2013, FX announced that the show had been picked up for a tenth season. FX President John Landgraf stated that there may be more seasons after that: “Whether it goes beyond that depends on whether the people who created the show want to go and whether the audience still wants to watch."[1]

On April 4, 2014 it was announced that FXX had signed RCG Productions to a 3-year contract to produce more comedy shows, including Season 11 and Season 12 of Sunny.[2]

The renewal for It's Always Sunny -- picked up for two seasons of 10 episodes each -- which took the series through its 12th season. The series became the longest-running live-action comedy in cable history, and its 12 seasons will tie My Three Sons and Two and a Half Men for the second-longest-running American live action comedy in TV history.

"The Gang Beats Boggs" January 14, 2015
Directed by: Todd Bierman - Written by: Rob McElhenney, Glenn Howerton, Dave Chernin, John Chernin and Lance Krall
The Gang attempts to beat one of the most storied achievements in sports history: they are trying to beat Wade Boggs' record of drinking more than 70 beers in a single cross-country flight.
|

"The Gang Group Dates" January 21, 2015
Directed by: Richard Keen - Written by: Charlie Day, Glenn Howerton and Rob McElhenney
The gang turns Paddy's into an internet dating hub where people group date and rate each other. Dennis becomes obsessed with his ever decreasing ratings, while Dee hands out zero star ratings after being "dumped" early.
|

"Psycho Pete Returns" January 28, 2015
Directed by: Todd Biermann - Written by: Charlie Day, Glenn Howerton & Rob McElhenney
Mac and Charlie's high school "gang leader" (leader of "the Freight Train") Psycho Pete stops in at Paddy's. Charlie and Mac are quickly disappointed by Pete's docile nature, and look for ways to get Pete back to his old 'Psycho' self. Frank, Dee, and Dennis set out to find help for Pete because they're afraid he's dangerous to them.
|

"Charlie Work" February 4, 2015
Directed by: Matt Shakman - Written by: Rob McElhenney, Charlie Day & Glenn Howerton
Charlie gets tipped off that the health inspector is coming to inspect Paddy's. Dennis, Dee, Frank, and Mac are involved in a scheme involving steaks, airline miles, and chickens, which has the bar in disarray, including live chickens everywhere. Charlie tries to get the bar in shape for inspection with little help from the rest of the gang.
| 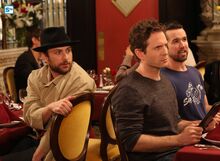 "The Gang Spies Like U.S." February 11, 2015
Directed by: Matt Shakman - Written by: David Hornsby
After Dennis and Mac enlist Dee to spy on the fish factory across the street, Charlie and Frank grow suspicious and decide to do some spying of their own.
|

"The Gang Misses the Boat" February 18, 2015
Directed by: Richie Keen - Written by: Charlie Day, Glenn Howerton and Rob McElhenney
After another failed venture, the Gang wonders if their group dynamic is bringing them down as individuals, causing them to separate from one another, and find out who they really are.
|

"The Gang Goes on Family Fight" March 4, 2015
Directed by: Matt Shakman - Written by: Charlie Day & Glenn Howerton & Rob McElhenney
When the gang appears on a nationally broadcasted game show, Dennis does his best to keep the gang's weirdness under wraps.
|

"Frank Retires" March 11, 2015
Directed by: Richie Keen - Written by: Charlie Day, Glenn Howerton and Rob McElhenney
When Frank decides to leave up the financial decisions of the bar to the gang, the decline of the bar's wellbeing as well as Frank's health begins and the toll is too much for any of them to take.
|

"Ass Kickers United: Mac and Charlie Join a Cult" March 18, 2015
Directed by: Heath Cullens - Written by: Scott Marder
"Asskickers" isn't just a hot new way to work out; it's a way of life...and maybe a cult. 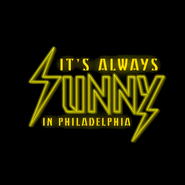 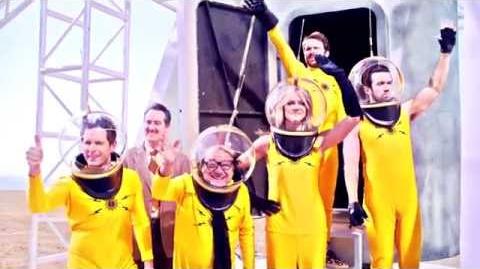 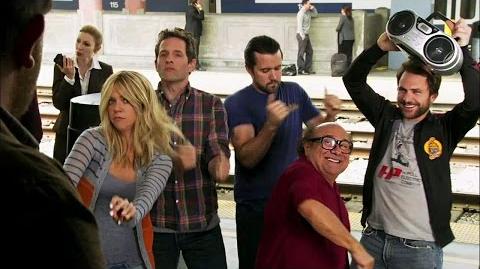 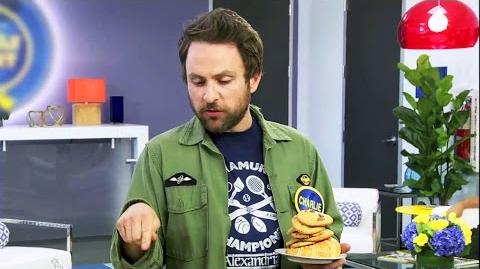 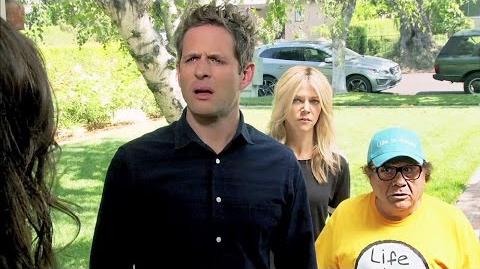 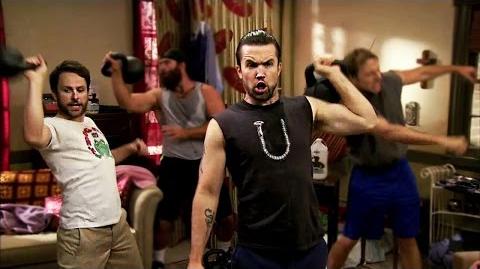 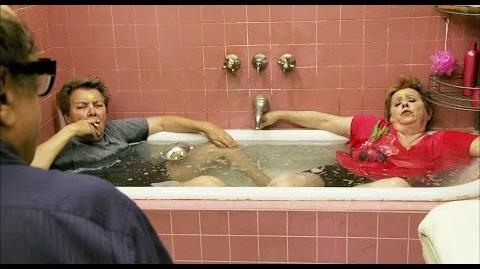