It's Always Sunny in Philadelphia Wiki
Register
Don't have an account?
Sign In
Advertisement
in: Seasons, Season 11

The eleventh season of It's Always Sunny in Philadelphia premiered January 6, 2016 on FXX and concluded on March 9, 2016. It consists of 10 episodes.

On April 4, 2014 it was announced that FX had signed RCG Productions to a 3-year contract to produce more comedy shows, including Season 11 and Season 12 of Sunny.[1]

Writing for the season was underway in February 2015, with Glenn Howerton tweeting a concept for an episode might include a follow-up to the game CharDee MacDennis.[2]

Episode titles were revealed on IMDb in August of 2015.[3] The first trailer for the season was revealed in late September 2015.

The second episode "Frank Falls Out the Window" features many throwbacks to the events of Season 2 when Danny DeVito joined the show as Frank Reynolds.

Dee's desire to be an actress and Charlie's art are featured heavily in "Dee Made a Smut Film" while Mac and Dennis' relationship as roommates is explored in "Mac & Dennis Move to the Suburbs."

The Lawyer, the McPoyles, and Bill Ponderosa returned in a follow-up to Season 8's "The Maureen Ponderosa Wedding Massacre" in "McPoyle vs. Ponderosa: The Trial of the Century".

"Chardee MacDennis 2: Electric Boogaloo" January 6, 2016
Directed by: Heath Cullens - Written by: Rob McElhenney and Charlie Day
The gang agree to a truce and demonstrate Chardee MacDennis for an interested board game executive, but things quickly go off the rails.
|

"Frank Falls Out the Window" January 13, 2016
Directed by: Heath Cullens - Written by: David Hornsby
Frank falls out of a window and his injury makes him think it's 2006, so the gang use it as a chance to correct past mistakes.
|

"The Gang Hits the Slopes" January 20, 2016
Directed by: Heath Cullens - Written by: Dave Chernin & John Chernin
Dennis and Frank battle Dee and Mac for control of the mountain and Charlie learns the rules of the slopes.
|

"Mac & Dennis Move to the Suburbs" February 3, 2016
Directed by: Todd Biermann - Written by: Hunter Covington
Mac and Dennis move to the suburbs for the cheap rent and open spaces but learn they may be meant for city life.
|

"Being Frank" February 10, 2016
Directed by: Heath Cullens - Written by: Scott Marder
A day in the life of Frank Reynold's as he tries to keep up with the gang's newest scheme.
|

"McPoyle vs. Ponderosa: The Trial of the Century" February 17, 2016
Directed by: Todd Biermann - Written by: Conor Galvin
Old grievances bubble to the surface when The Lawyer agrees to sue Bill Ponderosa on behalf of the Liam McPoyle and his lost eye.
|

"The Gang Goes to Hell" March 2, 2016
Directed by: Todd Biermann - Written by: David Hornsby & Scott Marder
The gang tries to take a vacation from their usual dynamic by going on a cruise, but old habits die hard.
| 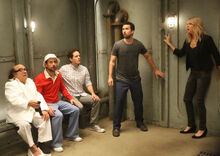 "The Gang Goes to Hell: Part Two" March 9, 2016
Directed by: Todd Biermann - Written by: David Hornsby & Scott Marder
With disaster looming, the gang tries unsuccessfully to make amends with one another.