It's Always Sunny in Philadelphia Wiki
Register
Don't have an account?
Sign In
Advertisement
in: Seasons, Season 13

Edit
watch 01:00
'It's Always Sunny in Philadelphia' Season 13 Trailer
Do you like this video?
Play Sound

November 7, 2018
The thirteenth season of It's Always Sunny in Philadelphia has been officially commissioned by the FXX network and premiered in September 2018 FXX. The first episode aired on September 5th, 2018. It consisted of 10 episodes.

On April 1, 2016 it was announced that FXX commissioned season 13 and season 14 of Sunny, tying it for the longest-running live action television comedy in American television history.[1]

In an interview published on March 8, 2017, Glenn Howerton stated that there may be an "extended hiatus" before season 13, and that he may not return to the show: "We may be taking an extended hiatus between season 12 and season 13. So I’m certainly staying open to the possibility of doing more, but there is a possibility that I will not."[2]

In an interview with TV Guide, Kaitlin Olson confirmed that the show will take an extended hiatus to accomodate the cast's other projects: "We ended up pushing our next season a year because we were all busy with separate projects this year. So at the end of this coming shooting season of The Mick I'll step right into Sunny after that."[3]

On April 7, 2018, Kailtin Olson posted the following to her Instagram account, next to a picture of a bird with Sweet Dee's head:

kaitlinolson Two more weeks until we start shooting season 13 of this lady and a few other guys. #ItsAlwaysSunnyInPhiladelphia #FXX #season13

She also confirmed in an interview with The Wrap that Glenn Howerton will be back for at least a few episodes as Dennis: “I do know that Glenn Howerton is coming back for some episodes...I don’t know the specifics, but I do know how he’s being introduced back in, and it is absolutely hilarious.”[4] 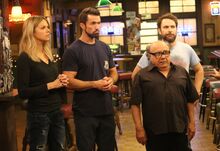 "The Gang Escapes" September 12, 2018
Directed by: Lauren Palmigiano - Written by: Megan Ganz
To boost productivity, Dee hires an at-home "Escape Room Experience" service to come to Dennis and Mac's apartment. Will they escape? Who will get the credit? What could go wrong?
|

"The Gang Beats Boggs: Ladies Reboot" September 19, 2018
Directed by: Kat Coiro - Written by: Dannah Phirman & Danielle Schneider
To one-up the guys, Dee has organized an "all-female reboot" of the Wade Boggs challenge on a first-of-it's-kind, all-female flight headed to L.A. for the women's march.
|

"Time's Up for the Gang" September 26, 2018
Directed by: Kat Coiro - Written by: Megan Ganz
Paddy's has been put on a list of bars that are sexually hostile to women, and the gang must attend a sexual harassment seminar to get off the list.
|

"The Gang Gets New Wheels" October 3, 2018
Directed by: Todd Biermann - Written by: Conor Galvin
Dee gets in with a group of cool, rich housewives. Dennis hits it off with some everyday blue-collar bros. Frank struggles to renew his license, and Charlie and Mac deal with a new generation of bicycle bullies.
|

"The Gang Solves the Bathroom Problem" October 10, 2018
Directed by: Josh Drisko - Written by: Erin Ryan
Jimmy Buffett is in town and the positive vibes are alive at the bar. But when Mac comes out of the women's bathroom, no one can leave until the bathroom situation is solved.
|

"The Gang Does a Clip Show" October 17, 2018
Directed by: Todd Biermann - Written by: Dannah Phirman & Danielle Schneider
With nothing to do while their phones update to the latest software, the gang decides to reminisce on old times. As everyone misremembers events from their past, the gang's current reality becomes altered.
|

"Charlie's Home Alone" October 24, 2018
Directed by: Kat Coiro - Written by: Adam Weinstock & Andy Jones
It's the weekend of Super Bowl LII, this time from Charlie's perspective. While Charlie searches the back office, Cricket steals the suit leaving Charlie home alone to defend himself.
|

"The Gang Wins the Big Game" October 31, 2018
Directed by: Kat Coiro - Written by: Conor Galvin
It's the most important weekend of their lives and Frank has treated the gang and a crew of their ragtag hangers-on with tickets to see the Eagles in the Super Bowl!
|

"Mac Finds His Pride" November 7, 2018
Directed by: Todd Biermann - Written by: Rob McElhenney & Charlie Day
Frank tries to recruit Mac for the gang's float for the Gay Pride Parade; Frank comes to the realization that Mac will never be secure with his sexual identity unless he comes out to his father.