The ninth season of It's Always Sunny in Philadelphia aired in the Fall of 2013, beginning Wednesday, September 4 @10pm on FXX. It consisted of 10 episodes and was broadcast in 720p HD.

In Season 9, The gang continues their depraved antics, engaging in attempts to change gun laws, win an award, and "stop" a convenience store robbery. Charlie even gets the Waitress! 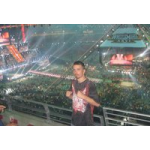