November 19, 2009
"The D.E.N.N.I.S. System" is the tenth episode of the fifth season of It's Always Sunny in Philadelphia.

Dennis reveals his foolproof system for seducing any woman to the rest of the gang, but they can't master the concept.

Dennis proudly plays a hateful voice message from Caylee, a pharmacist he recently had a relationship with, telling the gang that he now has her undying love. Dee argues that he has obtained the opposite, so Dennis agrees to explain his system for seducing any woman and earning her undying love: The D.E.N.N.I.S. System.

Demonstrate Value - Dennis pretended to purchase medications for his ill grandmother from Caylee. He then proceeded to

Engage Physically - by taking her on a cheap date to a closed restaurant with the backup plan of pizza and a movie. Mac played wingman and said he saw a spider, causing them to watch the movie on Dennis' bed which led to sex.

Nurture Dependence - Dennis prank called her as an angry neighbor, threatening her life. She grew to need him, and then he proceeded to

Neglect Emotionally - he continued to prank call her but didn't show up for her, causing her to fall into emotional distress.

Inspire Hope - he showed up at her window, telling her that he was afraid to love and that she cured him. After having emotionally passionate sex, he sneaks away in the middle of the night to never be heard from again -

Dee is appalled while Frank, Mac, and Charlie are all amazed by this system. Dee bets Dennis that he can't win Caylee back, a challenge he accepts. When Mac mentions Dee's boyfriend, the gang is shocked she is dating Ben. She shows them that he is waiting for her in the car in the 100 degree heat (with no air conditioning). Charlie and Dennis tell her he is playing her by using similar methods that Dennis uses on women.

Later, at the pharmacy, Dennis apologizes to Caylee and tells her that his grandmother took a turn for the worse. She tells him that the doctor signing his prescriptions was fake, a lie which he tries to cover up. He leaves but runs into Mac in the entryway, who is about to perform his own system on Caylee: Move in After Completion (ie. after Dennis is done having sex with a woman). Frank then shows up, urging Mac to hurry so he can get to his system - picking up the "scraps" after Dennis and Mac. Dennis demands that he must have his chance to "re-D.E.N.N.I.S." Caylee.

Meanwhile, Ben takes Dee to the park for a nice picnic. She has led herself to believe he is playing her and tries to leave the forest without his help. She falls down a hill and stumbles away, still refusing Ben's help.

Charlie complains the system isn't working for him and Dee complains that Ben isn't afraid of her independence. Dennis comes up with a plan to solve everyone's problems.

To convince Caylee that he isn't lying he brings an elder lady, Gladys, to a fair to pretend to be his grandmother. Mac brings Caylee to the fair where they casually run into Dennis. Meanwhile, Charlie plays a pitching game the Waitress is running at the fair. Frank is supposed to pose as a carny that Dee flirts with to make Ben jealous. However, Frank decides to pose as a doctor instead in an attempt to seduce Caylee himself. Pretending to be Dr. Mantis Toboggan, he enters and tells Dennis he has HIV in an attempt to make Caylee feel bad so she'll sleep with him. He then not-too-subtly drops a Magnum condom by her feet so she'll think he has a "monster dong".

Dee decides to make Ben jealous by flirting with a real carny, but the carny stabs her with a key. Charlie gets upset because he was supposed to stab the Waitress so he could help her. Dennis jumps in, upset that everyone is messing up his plan.

Caylee leaves with Ben, who dumps Dee because she was mean to him. The Waitress yells at the gang to take their fighting elsewhere and they leave the fair, leaving Gladys behind all alone.

Frank: See, I would have gone in and bought a box of magnum condoms, thus demonstrating I have a monster dong.

Dennis: I try to engage physically without ever going on a date, which to me is just a big waste of time and money.

Dennis: Once you've had sex with the woman, she will naturally start to depend on you, okay? All women do this.
Mac: They certainly do, you got that right!
Charlie: Sex with women!.. it's like that!

Dennis: Have her car towed, or slash or tires. Make her depend on you for rides.

Dennis: (On phone with Caylee, in a disguised voice) Welcome to Hell! Muhahaha.

Dennis: (On phone with Caylee, in a disguised voice) I'm watching you, you bitch. You're going to die tonight!

Dennis: And then, naturally, we bang.

Mac: I wait til you're done with them, and then I swoop in, give them a shoulder to cry on, and then we hump.
Dennis: You've been humping these girls after I'm done with them?
Mac: Oh yeah, dude. I come in as the sensitive intellectual type. Why do you think I'm always reading books and shit when we do the spider routine?
Dennis: I thought you were just my wingman though.
Mac: No, I'm swimming in your wake.

Frank: I got my magnum condoms, I got my wad of hundreds; I'm ready to plow!

Charlie: You're working at the fair! Well look at us... I'm a plumber, you're a fair worker... they go together well, right?

Dennis: So what did you do exactly?
Charlie: I broke into her place, I ripped her sink apart, I brought a bag of hair. And I come across looking like a total jerk!

Charlie: Maybe I should just stick to stalking. Maybe that's my system. She got a job at the fair, it could be fun to stalk around a fair.

Frank: Jesus Christ on the cross, you look like shit.

(Dennis is walking through the fair while pushing an old lady in a wheelchair.)
Gladys: What's going on?
Dennis: Well, Gladys, we are at a fair, and you're going to pretend to be my grandmother.
Gladys: My grandmother had an affair with Susan B. Anthony.

Frank: I got the test results. You're positive! You've got the HIV! You got the AIDS big time!

Dennis: Wrong! Wrong! Wrong! Wrong! You were supposed to let her get stabbed, hope that it hits a major artery, and then as she's dying you nurse her back to health, thereby making her totally dependent on you.

Dennis: You mean to tell me you got your face painted like a god damn frog person with no ulterior motive?
Ben: I'm a lizard!

Frank: Whoops! I dropped my monster condom that I use for my magnum dong. 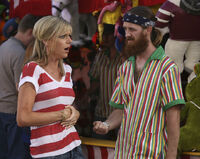