It's Always Sunny in Philadelphia Wiki
Register
Don't have an account?
Sign In
Advertisement
in: The Gang

The Gang is a group of amoral friends who own and work at Paddy's Pub.

At one point, Dennis claims that The Gang is "me, Mac and Charlie" and that Dee is not a member. Shortly after, Frank blackmails his way into the Gang. ("The Gang Goes Jihad")

However, as of Season 11, it is implied that Dennis, Mac, and Charlie have accepted Dee and Frank as members of The Gang. At one point, Dennis says to Mac, "Let's invite The Gang over," referring to having Charlie, Frank, and Dee over for dinner ("Mac & Dennis Move to the Suburbs") Later, Charlie and Mac decide to "go be with the Gang," this time referencing Dennis, Frank, and Dee. ("The Gang Goes to Hell: Part Two")

Due to their narcissistic absorption with themselves and each other, the Gang barely acknowledges the outside world, and often display a complete disregard for social norms. A recurring gag in the series is that the Gang will often become so caught up in their own world and focused on their own interests that they do not even notice anyone else and will often disregard and ignore the outside world completely until necessary, as part of a scheme or someone is forced to loudly interject. For example, the Gang frequently get caught up in a debate or argument at socially inappropriate times. Other examples include Frank, Dennis, Mac and Charlie attempting to break down a door, only to find the homeowners at home, and then proceed to break it down right in front of them anyway because of the lack of destructive gratification. On another occasion, Dennis and Charlie attempt to break through the door of a Korean restaurant by loudly kicking and ramming it, completely oblivious that they have disrupted the entire restaurant and the customers are staring at them.

The Gang has ended up causing much hardship to some of the people they come in contact with: Matthew Mara, a.k.a Rickety Cricket, was an ordained priest before an alleged "miracle" at Paddy's Pub ("The Gang Exploits A Miracle") reintroduced him to the Gang, and soon he found himself in a downward spiral that reduced him to a homeless "street rat." Similarly, they have cost The Waitress her job ("The Gang Sells Out") and subjected her to various other emotional trials and tribulations. They even cause trouble for people they don't actually know: while trying to "expose" Bruce Mathis as a "terrorist", they end up destroying a total stranger's car by ramming it with Frank's "rape van" multiple times. (The Gang Solves the Gas Crisis)

Despite frequently wreaking havoc on the lives of virtually anyone who comes into contact with them, either selective memory, repression or general narcissism results in the Gang never seeming to remember any of it. Consequently, they are often shocked when people they have hurt in the past are hostile towards them or do not want to help them.

No one in the Gang seems to have any friends outside the Gang. The creators of the show have often stated that one of the main reasons the characters stay with each other is because no one else will hang out with them. When Dennis inherits his mother's house and plans on using it as a "party mansion", everyone they think to invite is either dead or would have nothing to do with them because of something terrible the Gang has done to them. ("Dennis and Dee's Mom Is Dead")​ Dee has to trick The Waitress into going out for a "Sex In The City" night with her by saying she will give her a notebook Charlie keeps on her if she does. ("Who Pooped the Bed?") The Gang is forced to use Artemis as their sound person for a kid's pageant they put on even though she doesn't know what she's doing, because, as Mac says "We don't have a very deep bench".

The Gang constantly shows no regard for the law at all. They break the law in several ways in almost every episode, and all have a police record. For a full list of all known crimes they have committed, see List of crimes committed by the gang.

Members of the gang often create alliances against each other, sometimes also allying with others: 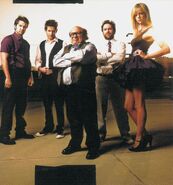