The Gang Goes to the Jersey Shore

"The Gang Goes to the Jersey Shore"

September 22, 2011
"The Gang Goes to the Jersey Shore" is the second episode of the seventh season of It's Always Sunny in Philadelphia.

Dee and Dennis take the gang to their favorite childhood vacation spot on the Jersey Shore. Things aren't quite as they remember them. Still, Mac, Frank and Charlie have the times of their lives; Dee and Dennis not so much.

Dennis and Dee stop Frank as he burns old photo albums behind Paddy's. They find photos of their favorite vacations at the Jersey shore and convince the rest of the gang to visit. Mac chokeholds Charlie so they can successfully take him unconscious because of his crippling fear of leaving Philadelphia.

At the beach, Dennis and Dee drink tequila out of sunscreen bottles and comment on how there are only stray dogs and no people around. Charlie enjoys the ocean and drinks sunscreen, even though Dee told him that it is not alcohol. They decide to show Charlie the boardwalk, which is also quite vacant, and decide to go under the boardwalk to find the spot where Dennis had his first kiss. There, they find two homeless men having sex. They are all appalled and a disgusted Charlie leaves to head back to the beach.

Dennis and Dee decide to try and "reset" their trip by going on an amusement part ride on the boardwalk. On the top of the ride, a braid of Dee's hair gets stuck in the gears and is ripped out. Dennis vomits. They go to the hospital to have the part of her scalp reattached and they meet a girl who invites them to party. They are forced to smoke Angel Dust and assist in robbing a laundromat where a robber gets shot. A doctor stitches up the robber and is then shot. Dennis and Dee are forced to dig his grave on the beach, but manage to escape.

Meanwhile, Mac and Frank sit on the beach and eat ham that has been soaked in rum. Stray dogs keep attacking them for the ham, so they decide to float in the ocean in a dingy. They fall asleep and wake up in the middle of the ocean. The ham floats away and Frank contemplates eating Mac, but a boat of guidos arrives and picks them up. On the boat they get spray-tans and steroids, retrieve the ham, and party all night long.

Elsewhere on the beach, Charlie entertains himself when he sees the Waitress walking towards him. He convinces her that he is not stalking her, and she agrees to spend the evening with him on the beach. In the morning, she wakes up and realizes she was tripping on Ecstasy the previous night and hurries away, disgusted.

Back at the hotel parking lot, Dennis and Dee yell at the rest of the Gang to get in the Land Rover and go back to Philly. 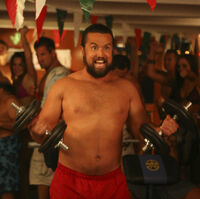 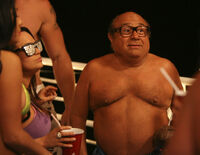 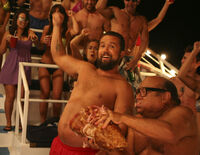