The Gang Wrestles for the Troops

"The Gang Wrestles for the Troops"

October 29, 2009
"The Gang Wrestles for the Troops" is the seventh episode of the fifth season of It's Always Sunny in Philadelphia.

There's nothing more American than wrestling. That's why the gang has decided to put on a wrestling show for the returning troops. Meanwhile, the soldier Dee has been chatting with online is not what she expected.

As the Gang watches Hulk Hogan face off against Nikolai Volkoff on Dee's laptop, she receives a message from a solider she has been flirting with online. Charlie amps up the rest of the Gang and convinces them to throw a wrestling match to show support for the troops. Frank wants to join as the eponymous "Trashman", but the guys don't approve.

Dennis, Mac, and Charlie attend a local amateur wrestling show and hire the star of the show, Da'Maniac, to be in their own show. He agrees to do it for $30. The boys decide to be his opponent under the characters "The Birds of War". When the realize Da'Maniac might be a real maniac, the decide to find someone else to fight him. The track down Rickety Cricket and convince him to wrestle in the match.

Meanwhile, Dee and Frank meet Ben, the soldier Dee has been chatting with, at a bus stop. When Dee finds out that he is in a wheelchair she claims to not be Desert Rose, her online alias, and runs away. Frank gives him a pair of jean shorts and invites him to the wrestling match. Later, Dee convinces Artemis to pose as Desert Rose and Ben stands up to hug her. Dee becomes jealous and tells Artemis that she plans on stealing him away.

The night of the wrestling match, Da' Maniac is arrested for unpaid parking tickets. The boys decide to wrestle Cricket themselves. Dee sings Seals' "Kiss from a Rose" and it hit with a chair by Cricket, who is dressed as a terrorist ("The Talibum"). Dennis and Charlie try to wrestle Cricket but he just throws sand in their faces. Mac runs away. Frank enters the ring as "The Trashman" and hits Cricket with a trashcan. As Cricket bleeds profusely from the neck, the audience is initially shocked but then cheers for Frank (who raises his arms in triumph as "Real American" plays). 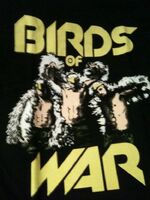