It's Always Sunny in Philadelphia Wiki
Register
Don't have an account?
Sign In
Advertisement
in: Season 13 Episodes, Episodes on a Saturday, Episodes at 10:00 am,
and 2 more

Time's Up for the Gang

"Time's Up for the Gang"

Paddy's has been put on a list of bars that are sexually hostile to women, so the gang must attend a sexual-harassment seminar in order to get off the list.

Paddy's having been placed on an internet list of unsafe places for women known as the "Shitty Bar List", the gang are attending a sexual harassment seminar in order to have the bar taken off the list.

The gang proceeds to behave in a completely inappropriate manner, using offensive and sexually charged language. Frank initally decides to leave the seminar upon being told that there is a 300-day statute of limitations for sexual assault, claiming that "they've got nothing on me past '92, tops". Upon being told that some states, for instance Nevada, are considering removing the statute of limitations altogether, Frank begins sweating and says he has to make some calls.

The attendees having been split into groups, Mac and Dee enact a workplace scenario as an exercise, but Mac almost immediately grabs Dee between the legs and hoists her high into the air. Initially impressed by Mac's physical prowess, claiming "that's the highest you've ever gotten me", she turns devious upon being told by the lecturer that Mac's actions constitute sexual assault and that Dee could press charges. Mac begins sweating. In the other lecture hall, Frank is walking around wearing a bathrobe, making calls to old associates, seemingly organizing payoffs to women he has sexually exploited in the past.

During a break for dinner, Dee is abusing her newfound powers to accuse men of sexual harassment, accusing the men around her of groping her and laughing when the food queue quickly disperses. Dennis urges the gang to stop taking an active part in the proceedings of the lecture and just sit back and listen instead, to avoid further incidents.

Back in the lecture hall, Charlie is getting very worked up about a hypothetical situation closely resembling his own stalking of the Waitress being described. In the ensuing cacophony, he lets slip that his sexual encounter with Dee was non-consensual, and that Dee in effect raped him. Dee claims that a woman can't molest or rape a man, but upon being told otherwise by the lecturers, Dee begins to sweat. Frank enters, still on the phone, and his bathrobe swings open, exposing his penis. Dennis, recognizing the chaos that the seminar has descended into, asks the lecturers to take a seat and takes over the running of the seminar himself.

Dennis, lecturing, makes the point that the only thing that determines whether or not a man will be accused of sexual harassment is how ugly he is. Turning to Frank, he says that while being rich can, to a degree, offset ugliness, it also increases risk, as a rich guy is "fun to take down". Turning to Mac, he asserts that being gay does not insulate one from accusations of sexual harassment, claiming that Mac has objectified "tons" of men, including Dennis himself. Turning to Charlie, he states that seeing oneself as a hopeless romantic doesn't make one's desperation one bit less unattractive. Finally turning to Dee, he simply states, in detail, that she's ugly.

Ending on some good news, Dennis says that it's not a crime to be ugly, so long as one is not also sloppy. He outlines his own practices to stave off accusations of sexual assault, for example, always receiving text messages from his sexual partners indicating "consent and enjoyment", though he implies he sends these himself from their phones. He urges the audience to similarly pre-emptively guard against such accusations, as they will otherwise go down and take him with them. Dennis reveals that he himself created the Shitty Bar List and organized the seminar, in order to force the bar owners of Philadelphia to listen to him. Kate, the female lecturer, accuses Dennis of being a monster. Dennis simply responds "Oh yeah? Prove it.". As the lecture hall empties, the gang goes for drinks at the pool. 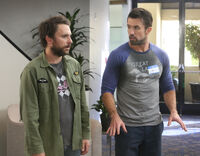