August 16, 2005
"Underage Drinking: A National Concern" is the third episode of the first season of It's Always Sunny in Philadelphia.

When Mac decides to make Paddy's Pub a safe haven for underage drinkers, it becomes high school all over again as Dee, Dennis, and Charlie get asked to the prom.

Paddy's Pub is very busy during a very successful and busy night. Slowly, Mac, Charlie and Dennis notice that the young looking crowd is not merely college students, but vastly underage patrons. After their realization, Dennis quickly pulls the plug on the evening, kicking out all of the underage drinkers.

While the gang is initially upset at their lack of professionalism, they soon conclude that they may have a social responsibility to provide a safe environment for these high school students to spend a night drinking. After Dennis suggests that they can also water down the drinks and jack up the prices, the Gang decides to permit underage drinking at Paddy's.

Meanwhile, Dee receives a phone call from Trey, a popular and athletic high school student she met at the bar. Desperately lonely, and never having enjoyed her own high school experience (due to her scoliosis), Dee goes on a number of dates with the student. However, Trey's former girlfriend Tammy becomes jealous of Dee's involvement. As a result, Tammy attempts to seduce Dennis to even the score.

Meanwhile, Charlie and Mac, bored from an evening of huffing Elmer's glue, (which they lament to see is clearly labeled non-toxic) receive a phone call from one of the high school students, inviting them to a house party. After Mac and Charlie purchase a keg for the party, Trey arrives with his date; Sweet Dee. Surprised to see one another, the three engage in a night of extreme drinking to curb any awkwardness. During the party, Charlie and Dee are both asked to the prom, while Mac is excluded.

Dennis, on the other hand, is blackmailed by Tammy to attend the prom with her. While Dennis is hesitant, he agrees in order to prevent the authorities from learning of Paddy's illegal practices. Since Dee and Charlie were unable to attend their own prom, they also decide to attend. Mac, pathetically, decides to go to the prom stag. When the Gang hosts a pre-prom party at Paddy's, both Trey and Tammy arrive for their dates (with Dee and Dennis respectively). During the encounter it becomes clear that both Trey and Tammy were merely using Dennis and Dee to make one another jealous; which as Charlie would proclaim, is "Classic Tammy".

Charlie ends up dancing alone at the prom, allowing his date to rekindle her romance with her former boyfriend.

Mac: And maybe we have a "social responsibility" to provide a safe haven for these kids to be kids. Y'know, experiment.

Dennis: Water down their drinks, jack up the prices. We could make a serious profit off these kids.
Mac: And they have no idea what the hell is going on. We would actually be doing something good.

Dee: I don't know how you guys live with yourself.
Charlie: One day at a time.
Mac & Dennis: Yup, yup.

Charlie: Look how much fun they're having, man.
Mac: Of course they are, they haven't realized how much life sucks yet.

Charlie: Well I was popular.
Dennis: Well, you were popular like how a clown is popular. You made us all laugh and all the guys knew you couldn't sleep with their girlfriends.

Dee: You are so sweet. Where were you when I was in high school?
Trey: I was eight.

Mac: These kids are wasted, bro. I thought we were cutting them off?
Dennis: I am cutting them off, these kids haven't had more than three drinks each. Plus, there's so much water in them, they're probably more hydrated than they ever have been in their entire lives.

Mac: I'm telling you, this is the wrong kind of glue
Charlie: No it' not.
Mac: This is made for, like, kindergarteners. Look: "Non-toxic and safe". We don't want safe, we want toxic.

Dee: My back brace was under my dress and mom called me fat so I stayed home and cried instead.

Mac: That dude's totally going to bang your prom date.
Dennis: Stop saying it! It's not funny! 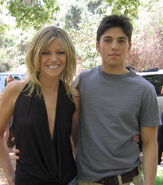