The season premiere of the eighth season of Sunny aired last night, and we want to know what you thought about "Pop-Pop: The Final Solution". If you already forgot what happend in the episode, perhaps this image will refresh your memory... 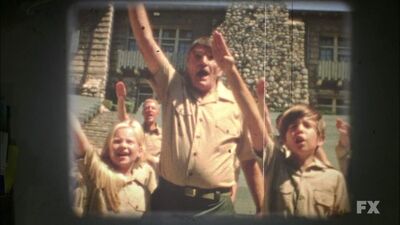 Yes, it's little Dee and Dennis Reynolds at a neo-nazi youth camp in 1981. I guess it was inevitable that The Gang, who are also the writers of the show, would tackle the subject of Nazis. Even though Mac, Frank, and Charlie set off on a quest to find Pop-Pop's painting of a german shepherd, which was possibly painted by Adolph Hitler himself, the episode was clearly not so much "Indiana Jones" as much as it was just family heritage discovery on crack. 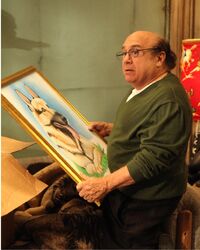 Then again, "Sunny" can take any subject matter and turn it into the "on crack" version. Speaking of crack, we got an early season appearance of Rickety Cricket, who, as expected, has an even more messed up face.

Please feel free to review the episode in the comments section below.